The "Henriëtte" Wincharger in Holland

In 1935 my father bought a houseboat as residence. The name of this boat is "Henriëtte" and still in our possession.  There was a living room and a bedroom in it, an A Ford-motor, a Johnson 4 stroke generator and – you guess it - Wincharger on the roof.  Of course there was a radio on board and a long radio aerial outside.  During the World War II and the occupation of Holland by the Germans we (my father, mother and three children) were living in this boat in Scheveningen near The Hague.  From 1940 up to and including 1945 there was no electricity except the 6 volt from this Wincharger.  During the winter in 1945 there was no electricity too in our neighbourhood and this period was in every aspect the lowest point in our life. There was no food in this part of Holland. The only luminous point there was, that was our Wincharger! Light for our family and our neighbours.  My father charged day by day our and the batteries of the neighbours and so we had light in the long dark and terrifying winter. The radio was hidden under the floor, strictly forbidden by the army of occupation.  The Wincharger was of great value for us and the memory even more........we will never forget. 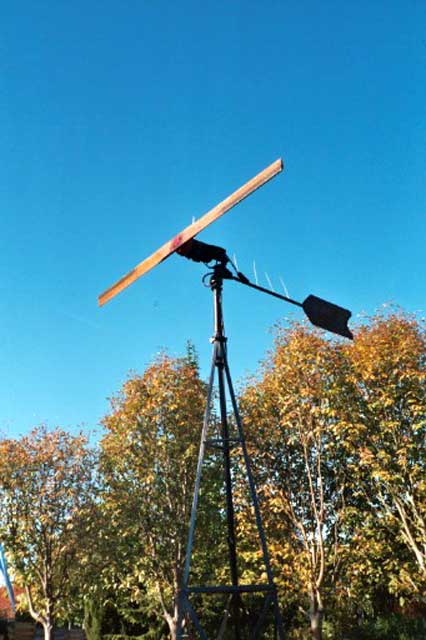 In 1947 the life in Holland began to be normal again and the Wincharger was stowed away under in the ship and we found it again 25 years ago when we got our inheritance. The difficulties began now, pieces of iron, a dynamo, two propellers and springs, chains and so on.  One propeller like that of an aeroplane, beautiful and narrow leaved.  What belongs together, what was where? No designs, no fotographics. There was nobody who could help us. The logic of elementary techniques helped us after all. Think, try and think again and you will find it, was the device. Finally the Wincharger with a three legs tower was complete, we thought. Striking is that there is no air-brake governor on it, but it is nice to see that by to much wind the propeller is turning out of the wind direction (angle of incidence) and that by changing a link in the stop-chain this moment of turning can be made earlier or later. Very ingeniously.
Some years ago we decided to rebuild the Wincharger in our garden. We wrote letters to the former address of the factory in Minnesota in the USA for information. No answer, of course not we know now. The Wincharger is now at present in our garden and is delivering a little bit of electricity. A fraction of that we think we need today in our welfare state.  We think, the Wincharger is more than a simple contemplation; remember the history that is perhaps the message and do not forget the past. So often the history teaches us that we learn nothing from the history. I think that the project of the Wincharger was the cradle of the use of electricity every where in sequestered regions and above all things, common. For communication, radio and lightning. It is possible a very dear memory for many people. But to see it, that is sometimes very difficult.

It is a pity that in our post-modern time this cradle often seems to be forgotten.